Fighting with Autism - Smashing down Stereotypes, Daring to be Different with Boxing

We proudly introduce 5 gifted young boxers, each one of them is a Fighting For Autism Junior Ambassador and each of them is on the Autistic Spectrum
. 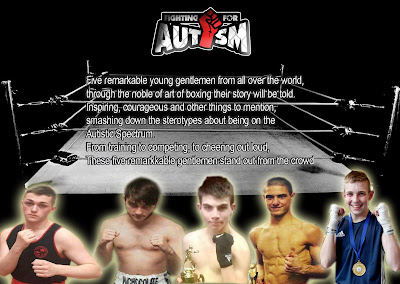 
In a little over a year Fighting For Autism, started the Junior Ambassador programme with young champions both on and off the Autistic Spectrum from around the globe helping to raise awareness through their chosen sport or martial art whether it be  Boxing, Jiu Jitsu, Taekwondo, Judo, Muay Thai, Kickboxing and the list goes on, with some truly inspiring journeys and stories being shared.

In the past year Fighting for Autism has accrued some of inspiring youngsters from around the world to help raise awareness together with us and at their respective clubs  and when they compete.
the amazing part is that the Junior Ambassadors are made up of future champions who are both on and off the autistic Spectrum todays blog brings you an insight into 5 of these individuals who are not only boxers, but are also on the autistic spectrum.

Josh Westcott, Zak Lovell, Nas Stowell, Rhys McCole from the United Kingdom and Alex MacDonald from the USA, are not just training and competing but also inspiring each other and others to perhaps try something new and pick up a new skill.
To say these gentlemen were inspiring would be an understatement these young men are leading the way in smashing down stereotypes, and shining the torch high for so many other people to show the world what they can do.
Last year, Nas, Rhys, Josh and Zak got the chance to interview former WBC world champion
Wayne "Pocket Rocket" McCullough, their passion for their sport is phenomenal, and the questions asked were excellent.

Hearing amazing insights about these young men from their parents, carers and coaches on how through boxing, notable improvements socially and academically has gone on to see them blossom into gentleman that are truly something to be proud of, they are an absolute credit to themselves, their families, their clubs, their sport and #FightingForAutism 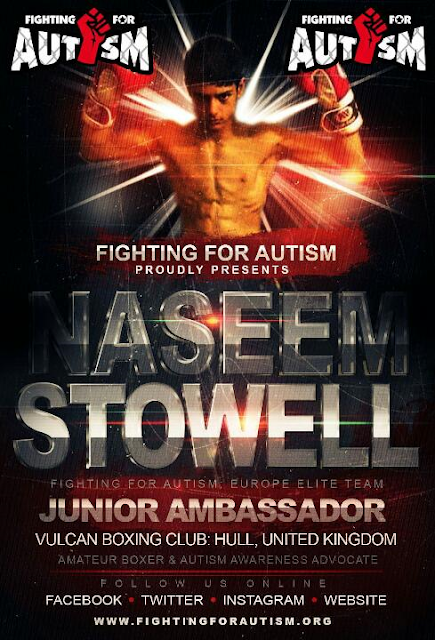 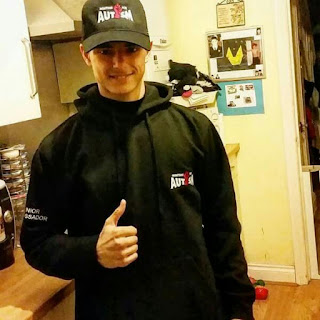 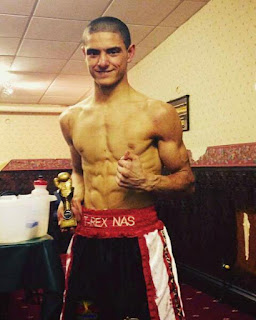 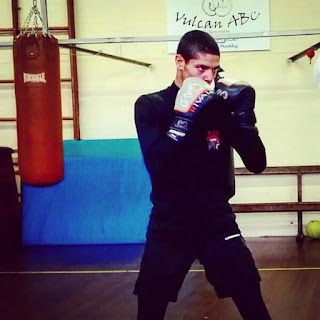 ﻿
"I always knew Nas was different but no one would listen to me. When he started school age 4 he could hardly speak and cried constantly as he rocked back and forth.
By the age of 7 he had been labelled the naughty child in school, had no friends and was struggling to survive at school. His naughty label followed him through school, where he was falling further behind and spending hours in isolation.
I was called into school every day and told he was disrupting the class with his strange noises and periods of zoning out. I told him he wasn’t naughty and begged for help.
Nas started play therapy two afternoons a week as well as school and home observations with a psychologists followed by months of testing at the children’s centre. All through this the school told me I would never get a diagnosis for Nas and that he would never achieve anything as he was simply just naughty.
Eventually when Nas was 10 the results come in, Nas was diagnosed with ADHD, Tic’s and falls into the spectrum for Autism as he has many autistic traits.
Naseem Started on medication twice a day and the change was amazing, he could suddenly focus and began to catch up.
Nas went from 60/70% attendance at school to 100% also making a couple of friends and was happy.
Naseem started to train in 2012  and took to Boxing Instantly, boxing has now become his passion and he trains every day.
Naseem has had 6 fights, won 3 and lost 3 and won best boxer of the night 3 times and has also won the most dedicated boxer award at the club". (Liz - Nas's Mum)

In between this Nas is a keen fundraiser, putting his feet to the floor, doing sponsored runs to raise funds for his boxing club so that they can purchase new equipment so other kids can benefit from the sport just as he has. 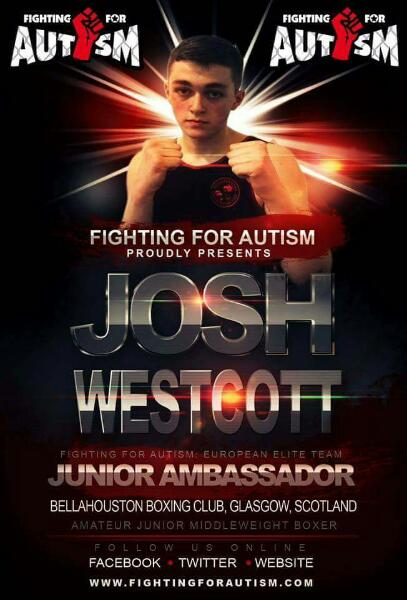 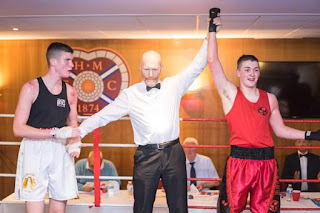 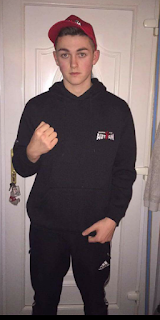 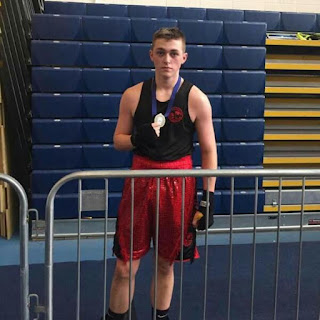 Josh was diagnosed with Asperger's when he was 10 after 5 hard years fighting to get the school and doctor to listen. Josh was bullied by staff in his primary school and received a written and verbal apology for it. He started boxing 3 and a half years ago after completing CBT for the anger he had from being bullied. From the very first boxing session Josh was hooked, improving and growing every week. Boxing has helped every area in Josh's life, from confidence, self esteem, patience, even helping him not be fast reacting to frustrating situations, and he now also helps coach his clubs under 12 class, it has been 100% beneficial.
Josh doesn't have his nickname yet, some call him "Juggernaut Josh" although he's not used it at a bout yet. He boxes as a 75kg Junior Middleweight which is tough to match for in Scotland as his year peers have always been smaller, we're hoping for more matches as his peers stretch. Josh boxes out of Bellahouston Boxing Club in Southside Glasgow Scotland. (Serena- Josh's Mum ) 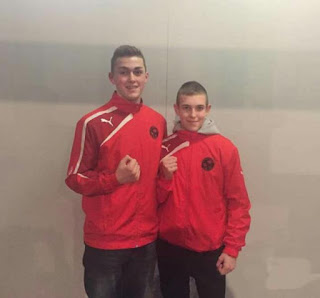 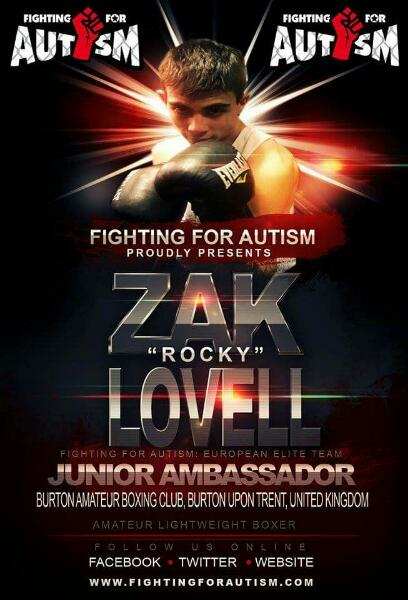 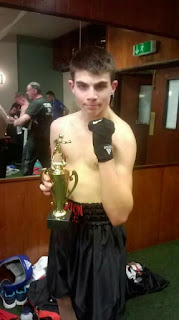 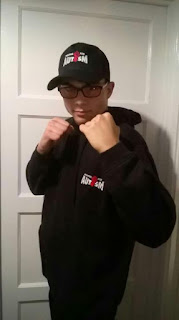 "Zak is 16 years old,  He is 59kg, and fights for Burton Amateur Boxing Club, he has had one skills bout and competitive bout, his club said he did them really proud.   Zak trains 4 nights a week at Burton ABC, and then a 5th night at the club with coach Neville Brown - he also has some private coaching sessions with Neville". ( Cat-Zak's Mum, who has gone on to gain a boxing qualification)
Zak was inspired to become a Junior Ambassador by Nas "T-Rex" Stowell, and is going from strength to strength.
At Christmas we asked for  festive posts to be put up with a Fighting For Autism hash tag, with the winner receiving a pair of customised Fighting For Autism Gloves, Zak's post not only that wasn't your average yuletide theme, but what it did do was look at a young gentleman who has come so far on his journey, never gave up, keeps practicing and is becoming better and better at the sport he loves on a daily basis.
a young man inspired by boxing greats like the "Brockton Blockbuster" Rocky Marciano this is where Zak has taken his fighting nickname from.
Alex "White Chocolate" MacDonald - Boxer and  Junior Ambassador from New York USA 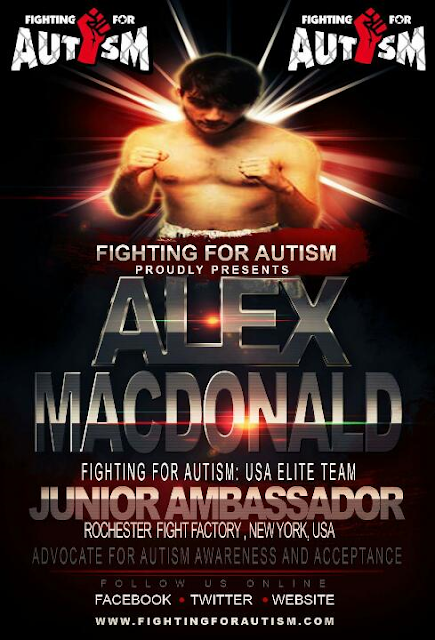 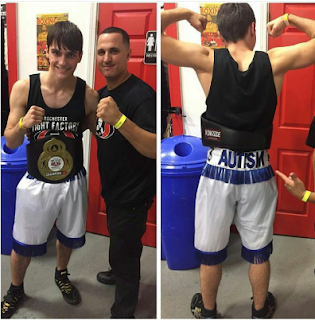 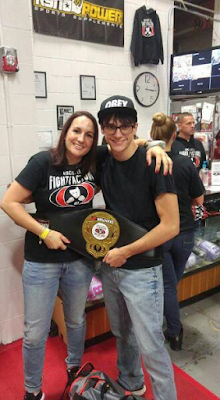 "I started boxing 1 year ago and loved it ever since. Growing up with autism no one really understands me. No one had my back so I would always have my own. People who always call me names and harass me non stop. I always stood up for myself and not run away. I would always confront them and never back down. This lead to me getting my butt kicked everyday. It was not until 10th grade were I wanted to play a sport. I found out wrestling a few days into 12th grade and joined the team. After the season was over I wanted to be in another combat sport. I wanted to box when I was young so I started boxing 1 year ago. Right now I love boxing more than anything in the world. I have found my purpose in life. It is to be the best boxer in history and to do it having autism. I know if I accomplish that there will be so many people who will think differently about them having autism. They will start having themselves to a higher standard in life. They will not think autism is a curse, they will start thinking it's a blessing".(Alex McDonald)

Alex is Fighting For Autism's first boxing Junior Ambassador in the USA and is highly regarded by his coaches and training partners. 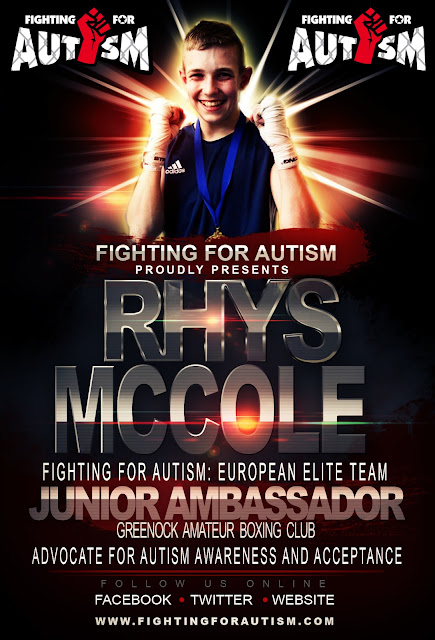 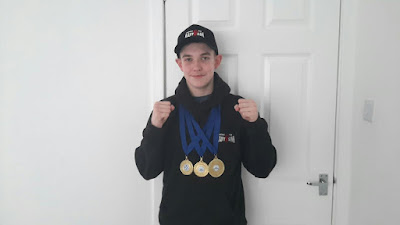 Rhys is a young gentleman who has over come significant adversity, Rhys not only is on the Autistic Spectrum but also faced battles with asthma, multiple holes in his heart, visual disorder and
Meares-Irlen Syndrome  as well.
Rhys who started boxing at the age of 10, and has gone on to capture gold medals at National level, a few months back Rhys was in hospital not knowing if he'd be able to compete, not only did he get out of hospital, he went on to win his weight category, his determination and dedication have seen him earn praise from Sports Scotland.
Rhys has said  " Boxing has given me the chance to flourish and make friends, its helping me to progress as a person as well as an athlete".

"Rhys was born with four holes in his heart and spent time in intensive care as a baby. He fought then and he is still fighting, despite being diagnosed with five other disabilities and learning difficulties.
Boxing has been a life-changer for Rhys and he had to battle his way into it as there is no disabled strand in boxing within Scotland. Luckily, consultants gave him the green light to be a mainstream boxer and he has excelled.
His hard work and dedication have not only led to him winning medals and titles but also many admirers at his sheer bravery and unwavering belief that everyone should be treated equally".
James- Rhys's carer.

Posted by Fighting For Autism at 18:49

Fighting For Autism
Fighting for Autism is a non profit organisation that proudly works with children, families and communities to bring Autism Awareness and inclusion amongst different cultures, to help with self esteem and anti-bullying programs for children and adults living on the autism spectrum. Fighting for Autism's Managing Directors know first hand living with Autism as each Director of our organisation is a parent of a child with Autism. we strive to raise awareness and gain acceptance to those on the spectrum, and the their loved ones through the boxing and martial art communities, whose support has been phenomenal, we have around 250+ Ambassadors from the Martial Arts and Boxing World's and with high profile athletes, coaches students and martial arts promotions and further afield around the globe, along with boxing clubs and martial arts schools who are helping to raise Autism awareness together and actively be in the corner for those on the spectrum.